How Sports Chiropractors Stay Covered on the Road

As sports teams began to travel from state to state, bringing along their chiropractic physicians, athletic trainers, PTs and others, concerns began to arise as to whether or not the healthcare provider’s malpractice coverage would travel with and cover them if needed. Some states had provisions in place, while many were silent as to how the practitioner should proceed.

Protecting the practitioner and athlete became a priority as concerns grew in the healthcare and athletic communities.

After many years of rewording, The Sports Medicine Licensure Clarity Act of 2018 overwhelmingly passed the United States Senate on October 3, 2018 after having passed through the U.S. House of Representatives in January 2017. The legislation was signed into law on October 5, 2018.

The bill spells out clearly that professional liability insurance will travel with the practitioners as they move about and travel with sports teams. The practitioners cannot practice procedures in the state they travel to that they would not be allowed to practice in the state(s) they are currently licensed in. A practitioner cannot “exceed the scope of a substantially similar sports medicine professional license in the secondary State.” It describes the term “covered sports medicine professional” as a physician, athletic trainer, or other healthcare professional. The chiropractic profession worked diligently to ensure inclusion into the legislation that was brought forward.

An important requirement of the legislation is that the provider licensed to practice in the primary State “provides covered medical services, pursuant to a written agreement with an athlete, an athletic team, a national governing body, a high school, or an institution of higher education.” The practitioner must

disclose to their liability carrier, in writing, the “the nature and extent of such services” prior to delivering the healthcare services.

Chiropractic physicians and other health professionals are now assured that as they travel across state lines, they will be able to care for athletes knowing they are protected by federal legislation that allows their liability insurance to travel with them. It’s called “Travel To Treat.”

The legislation is now a win-win for both the healthcare practitioner as well as the athlete, as it provides liability coverage reducing the potential for a huge financial loss to the practitioner while at the same time ensuring the athlete has continuity of care. Teams now have increased protection should an incident occur.

This legislation is an exciting step forward for members of the chiropractic profession who continue to move front and center in the sports world, providing outstanding care and attention for athletes throughout the United States.

Dr. Clarke graduated from Logan College of Chiropractic in St. Louis and has practiced in New Jersey for over 30 years. He’s treated many patient types, from World Champion boxers to professional athletes, and was also among the first chiropractic physicians to get to Ground Zero after the 9/11 attacks to care for injured emergency responders. Dr. Clarke served as the President of the Association of New Jersey Chiropractors from 2007-2011 and was reelected in 2016. He currently serves on the ANJC State Board of Directors and has been Legislative Chairman since 2004. He also works as a chiropractic physician and clinic director at High Street Rehab in Nutley, New Jersey. 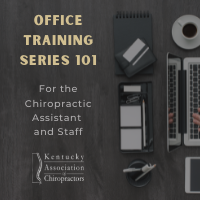